Record of the week: The Clash – Cost of Living EP
Highest entry: Sex Pistols – C’mon Everybody

6th May 2022 – The cashing in on the Sex Pistols and punk. I didn’t know it at the time, I was just thrilled with it all. Promoting songs like C’mon Everybody really just shows that punk was founded in the roots of rock, which was founded on….etc etc… All those people outraged by this ugly phenomenon – do they think they won a battle for decency or realise that the rebellion was not that dangerous after all.

6th May 2022 – This would have been a good lesson to show that teamwork beats individualism. To someone who thought about it more at the time!

6th May 2022 – 42 metres seems a fair distance. I should be proud. I guess I was. Yesterday I played football with a couple of students in the school playground. I prefer goalkeeping these days as it’s less running around. But when the ball goes past me, then I have to chase around for it and I was doing well for a little while. I think I ended up playing for about twenty minutes, enjoying the exercise and camaraderie with these kids, before starting to feel dizzy and sweating too much. I’m quite proud these days of my stamina, even though I feel sad that I can no longer just keep going and going. Could I? If I really wanted to?

6th May 2022 – Reminding myself of the Lone Ranger – that’s a fun song. And who knew it was banned by the BBC initially due to its drug and homosexual references!? Really? I’ll have to give it a closer listen but I think sometimes people just seek to be offended!

6th May 2022 – Days when injuries couldn’t stop you from still doing things. My leg, obviously, didn’t kill me!

Record of the week: Squeeze – Up The Junction
Highest entry: Amii Stewart – Light My Fire

3rd May 2022 – What the world never needed. A disco version of Light My Fire. At least it’s not got Jim Morrison singing it, I suppose! Squeeze – when New Wave still had potential. Great storytelling songwriting performance. It’s hard to comprehend the deep meaning songs like this held, as part of our cultural growth, the collective zeitgeist for those exposed to it and how, now, it’s forgotten and meaningless. Or it feels that way at least. But maybe I’m just in a funny mood.

I think about the impact I might’ve had on some of the people I’ve come across in my life and some days it feels like that moment may have disappeared forever, ineffective, meaningless. Then on other days, I consider how every little bit counts, that they may not be specifically recalled but one’s actions always have an effect, no matter how trivial and small.

I guess I’m projecting what I’ve been reading today back onto this time and a song by Squeeze!

3rd May 2022 – If I could go back in time, I would slap myself and tell myself to write more detail!

3rd May 2022 – I was watching some video recently about the foibles of the English and one point was that we always talk about the weather, not just as small talk but as main conversation points. Of course, you can analyse all the possible reasons for this but my main thought was that this doesn’t seem to be an idiosyncrasy peculiar to the English.

3rd May 2022 – I can hear this only spoken in an English accent. Imagine Basil Fawlty. I feel comfortable enough to make this stereotype.

3rd May 2022 – My ongoing effort to write something about Ipswich every Saturday. I was already finding ways to cheat the system. 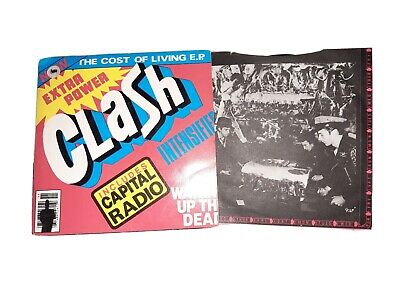 Record of the week: Tubeway Army – Are Friends Electric?
Highest entry: Eddie Grant – Living on the Frontline
What crap!

27th Apr 2022 – Well, it seems I wasn’t keen on Eddie Grant. Not even sure I can recall this tune. It’s vaguely in the data bank at the back left somewhere, though I may be confusing it with ‘Electric Avenue’. I think the Tubeway Army song and video was just a curiosity at the time, I soon came to detest Gary Numan. Compared with much modern music though it has become interesting to me again. I think I like a few Tubeway Army album tracks in the last 5 years or so that I went out searching.

27th Apr 2022 – The day was boring and scored zero. These days a boring day may score a 10! Interesting that I was writing to an audience (in my head) and indeed, I am the audience. I do wish I had written more but there were some years I didn’t write anything at all.

27th Apr 2022 – A lot of The Clash singles I bought well after their release date and they didn’t have picture covers but the Cost of Living had a great fold-out picture cover and four great tracks. I spent a long time listening and pouring over the artwork and details of the cover. All those ideas were folding and reforming in my mind. Groovy Times had a jump in the grooves that became an endearing memory and I always expect it whenever I still listen.

The Skids haven’t fared so well in my memory though I think I do have a Best Of in my collection somewhere. Their singles were always pretty great though. I should go listen to them again.

27th Apr 2022 – I can’t imagine listening to the same music over and over again now – but, I should. I recently picked up a High Back Chairs CD that didn’t grab me on first listen but decided to give it another go the following day and, with the aid of extra volume, a couple of tunes wormed their way into the brainium and I listened ago a couple of days later. Now the disc is sitting there, with dark attractors pulling at me, vying along with the other piles of discs I wish to listen to, either right now, or over the coming fortnight. Time is fluid.

Record of the week: M – M Factor
Highest entry: Squeeze – Up The Junction

20th Apr 2022 – M Factor was the b-side of Pop Muzik and is a preferable listen these days as Pop Muzik became too successful and familiar. Squeeze’s Up The Junction is another classic pop tune that makes me want to go and seek out more of their music though I have a feeling I may have done this in the past and been disappointed to discover that they were just a great singles band.

20th Apr 2022 – Music obsession was forming fast this year. Of course, at the time it was much more difficult to hear new music and there were far fewer options for entertainment. This really focused interest on whatever it was that caught your attention.

20th Apr 2022 – As well as being in the football team I was good at sprinting and other field events. I eventually got good at Long Jump and High Jump too. In the last couple of years, an old school friend posted on Facebook about how I seemed to be nonchalantly unconcerned about these events and that it seems I was just very casually good (or better than other participants at the time) at them. I was quite proud of myself but when moving up to high school later, the competition got much stronger. I still did fairly well though.

20th Apr 2022 – We didn’t often play cricket in PE but at this time we were too young to be trusted with javelins so there was an event to see who could throw a cricket ball the furthest. I loved this and I was very good at it. One time, balls were being returned from the field and Jonathan Duncan wasn’t paying attention. A ball came flying at speed and smacked him right on the temple, with an echoing clunk. His eyes rolled and his legs crumpled as he dropped to the grass. He soon got back up and went to the sick bay for a while but earned his deserved reputation as a ‘tough nut’.

20th Apr 2022 – Sick again. I wonder if I was really sick, or I probably was a little but not really that bad. Well, that habit certainly continued for the following 40 years or so. Lucky that I always had a set wage. As I learn about and see different parts of the world I realise how much I have taken for granted in my life.

20th Apr 2022 – Not so sick that friends couldn’t come and play! And likely I was making a healthy recovery by lunchtime when it would be too late to bother going to school. As kids, we already know how to play the game.

20th Apr 2022 – Arnold Muhren and Franz Thiessen were the first players (of note at least) from abroad to play in the English League. It was a big discussion point at the time. In the following 20 years, things moved along to the point that it seemed as if some teams had NO English players.

Football feels fully biased towards the teams with the most money and spending power so that there are very few exceptions to the same 6-10 teams winning every year. Although somewhat floored, I like the systems in place in Australia to try and balance things out as much as they can.