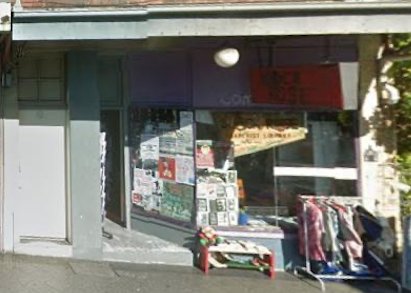 From 4pm – all ages and species welcome!

16th May 2021 – The Compound was the unofficial title of the space at 22 Enmore Road in Newtown, a tiny, tiny back room just a few doors down from Paint It Black and irregular shows were organised by members of the collective of folks who worked there.

After many complaints and burnout this was the last show though and it was absolutely rammed as it was just at the time that Eddy Current Suppression Ring were taking off out of the underground and into some brief limelight.

Sometime soon after the shows stopped here various parts of the space became the new site for Black Rose Anarchist Bookshop for a couple of years, as seen in the picture above. The venue space was through the door on the left and down the hall at the back.

Pic: This is where it happened!

The Thaw
Gone By Ten
Eucalypt
Guns Are For Kids
Gallucci

From the Thaw blogspot

’twas a wet and windy night…

ah, last friday. the first real rains we’ve had in months. and of course it had to be on when we were playing at st ives youth centre, out in the suburbs!

it took us nearly an hour and a half to get there from lidcombe! bloody ridiculous!!! why so many morons needed to be on the road i will never fathom

despite the soggy surrounds it was a rather great night with ample punters and glory up on stage. gallucci went nuts on the floor (literally) and swapped us for some rad tapes, guns are for kids had a great dance up on stage, eucalypt band ripped it up and even featured some sleigh bells, and local band gone by ten put in a solid showing with one of the most gorgeous kits i’ve seen for a long time. and we played somewhere in there too. PLUS the fantastic folk at the youth centre made us delish tofu sangers *yyyuuuummmm*

it’s a great venue so if you’re interested in playing there give em a call or email or something… i’ll post it as soon as i locate it!

16th May 2021 – Trying to spread things out around Sydney, I contacted St Ives Youth Centre about putting on a show there and they were cool to give it a go. It went well but I didn’t end up doing another show there. I’m not sure if they had any more after this* but it was a good location, although nowhere near a train station, which would have made it difficult for folks from other parts of the city. Well, we gave it a go and the bands were good enough to tough it out without much or any financial reward.

*A quick search for a relevant picture turns up a video of Carpathian playing here in 2010.