See you later Adelaide, I couldn’t wait to leave you.

I got a taxi to the airport, three hours before take off.  I just couldn’t sit around at the house, waiting.  It was time to start the journey even if that meant sitting and reading my book at the airport for a couple of hours.

I will miss you slightly, in that comfort of a regimen of work and sleep, preparing for these next precipitous steps, uncomfortable dread gnawing at me.

A zip and snooze and I’m landing in Brisbane as the sun sets back nearer Adelaide.  My son, Hayden, is waiting for me with a big hug and we get lost in the maze of car parks and lifts, assisting others who are similarly lost. 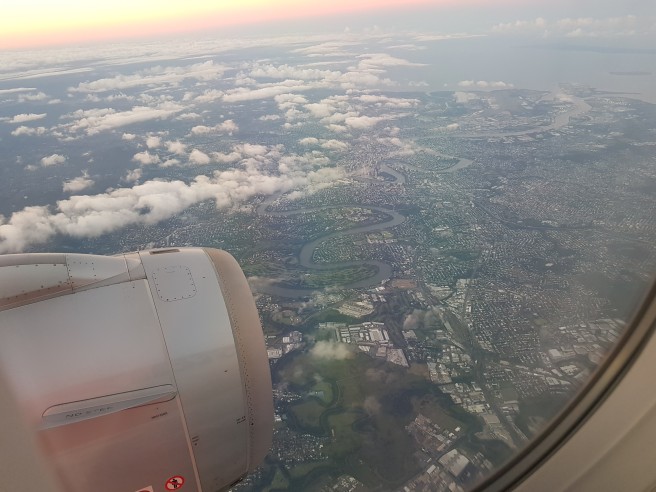 Brisbane is the opposite of Adelaide in road layout, it’s a mess, made messier by the winding river running through it.  It also makes it more interesting immediately.

We arrive at our apartment, ablute, and then search for food.  Opting for takeaway burgers and beer, we sit and talk for an hour or so before hitting the sack in my first decent bed for many months.  Blissful rest with crazy dreams.

It’s interesting to watch Hayden finding his way in the world.  I am now at the point where I just have no idea what ‘teh kids’ (as I call them, on purpose typo) are into these days.  Popular culture was never my thing and though Hayden has his own interests outside popular culture at least he still understands all those current references.

I’m really only interested in old bookshops and reading about history, trying to get a better understanding how we are where we are.  No longer being in the now, doing the do.

But I know I must do the do again when reaching Thailand and I was visualising a day in my life there.  Riding a motorcycle to school to teach English, I want to feel that thrill on the new, fill myself with the wonder of ‘how did my life end up here – that’s just amazing!’  But then also wanting it to feel familiar again, something normal, but not get to the point of a rat race boredom.  A balance is something I would like to strike and something I feel like I’ve never been able to achieve.  Like sitting still, very fast.  Maybe it’s just the way I’m wired.

Today we went book shopping and found a great store called Archives.  If I had the time I would’ve spent so long looking through here but opted instead just to ask at the counter for a couple of books I remembered being interested in finding.  Sometimes I think it’s just a little game of something to do in a place, with the possibility of a little reward at the end.  Like setting a little goal for the day.  The assistant took me straight to two of the books I asked about and I was amazed that she knew them immediately and where they were located.  If I ran a bookshop that’s how I would want to be, knowing exactly what you have and where it is.

The only problem with these two books is that they are both massive and heavy.  Hayden and I struck a deal that he will bring them to me later in the year or wherever it is that he gets chance to visit us in Thailand.  I have enough to read already so no hurry really.

I used to hate reading, sometimes would force myself to read books just for the hell of it.  Somewhere along the way I’ve just found myself enjoying it more.  I read, and have always read, lots of comics, usually alternative and mature comics rather than superhero type stuff, though I am now going through old 60s and 70s Marvel.  I’m not sure what the appeal to me is really?  Maybe getting lost in those world with some hints of visuals perhaps, as I generally only read non-fiction books otherwise.  I actually would like to read more fiction too and get lost in those worlds but somehow real life books are just what is interesting to me these days.

This afternoon I will attempt to write a small piece for my mothers funeral.  I have an idea for it, just a small event which sums up her attitude to life and dealing with problems.

Having Hayden around is distracting me from thinking about my mum not being there to talk to.  I really want to show her today’s pictures of our house, but showed them to him instead.

Hayden is a typical early 20s guy I guess, with what people my age might consider strange ideas, thoughts or views on events in the world.  He does, however, have his head screwed on and shows a lot of empathy a lot of the time.  When I think back to my life at his age I was the same, finding my way, honing my opinions and beliefs.  I discussed this with him today and said I thought that every parent wants their children to gain the wisdom they themselves now have, faster than they did.  To get smarter, quicker.  However, being a parent, being older, you also know that that is not how it works.  You can nudge in certain directions but one can only grow under their own directives.  When Hayden is ready, he will be.  He’s happy enough and figuring it out.