“Time is such a deceiver.”

So, it’s been a while.  Who knows where the time goes? That was the original tagline but I got sucked in by the Leaving Trains instead.  In fact, there’s any number of songs that could be quoted for this post because… it’s been a while!

After the mad rush of Songkran, sobriety took hold out of necessity.  It wasn’t that I wouldn’t like to have had a drink it’s just that there wasn’t time.

I was secreted off to a rural location on the outskirts of Chiang Mai for a month of intense training in the arts of teaching English (CELTA – look it up).  Of course, being entirely ignorant of the subject, beyond speaking it for the past 49 years or so, I arrived early to get a little refresher on the witchery that is English grammar.  It was not nearly enough preparation.

I had been put to sleep many a time whilst opening a grammar book or watching videos on the subject.  Luckily we had a teacher who was a female version of my old pal back in Southampton, Rob Callen.  She was precise and accurate and even modelled some of the lessons that we would end up learning in the coming weeks, without realising it of course.

So, I said we.  I was joined by Tom, a recently retired American looking to support himself a little beyond what the pension there pays so he could spend six months living in his new house in Portugal.  Tom was also from an IT background so we bonded quickly enough around the bullshit that that involves.  We were both concerned about our abilities to be able to complete the course, knowing how intense we heard it would be.  Along with us was Victoria, from London, whose grammar knowledge shone in comparison.  Mid-30s, deciding on her future possibilities, whilst travelling to vacations and friends’ weddings around the world, she was a bright and bubbly counter to the two old blokes.

And so it was for the first 3 or 4 nights as we did a couple of days of grammar refreshing, in which I was mostly bewildered but also provoked.  English grammar does seem like the kind of thing I could get deep into and become the ‘grammar nazi’ amongst my friends.  Though considering we are about to learn how to teach English as a second language in a foreign country though, my relaxed attitude is more inclined to take precedence.

Our facility is structured like a resort hotel.   There are teaching rooms, a reception and a restaurant.  More importantly, our personal rooms are cleaned daily, there’s a laundry service and outside my balcony, there is a 50-metre swimming pool.  Oh yeah, there’s aircon too.  For some reason, the keycard in my room didn’t work properly so the aircon stayed on even when I wasn’t there.  What a blessing. 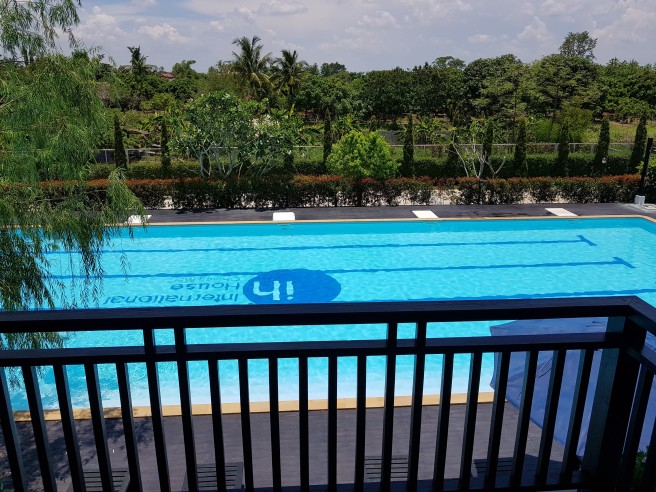 With no pressure and performance ratings around the grammar refresher – we studied, we learned, we swam and we ate.  It was the calm before the storm.  Our little world was about to be shattered when all the other students would arrive.

And talking of storms.  One arrived about five minutes after I made it to my room on that first day.  There was a lot of damage to the surrounding gardens and it took the internet out for a while too.  Both storms and internet outages would become regular occurrences during my time there.

I guess the grammar refresher paid off a little as I can recognise myself switching in and out of different tenses as I write this but they seem to make more sense to me as I write them.

Anyway, the quiet was broken as other students started arriving, as well as our teachers too.  And this is where things sometimes got confusing as we were students, and we would be teachers so we had students as well.  On top of all the learning our brains were being jammed with, it was sometimes confusing to be calling home and talking about teachers (teaching us), teachers (us), teachers studying (many people on the course were already teachers), students (us) and students (who we were teaching)!

Confused? You will be!  In the next episode of….. (Prizes for knowing where this quote comes from*)

* there are no prizes.